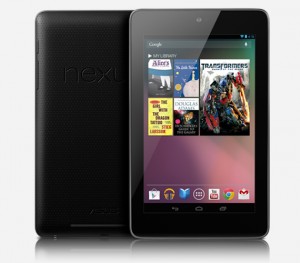 The Google Nexus 7 is made by ASUS, which shows that Google still wants to work with its trusted computer partners, even though it owns Motorola Mobility. For the price you pay, this could be the best tablet on the market. It features a 7 inch IPS display, with sharp colors and very bright contrasts. As with the Galaxy Nexus, the Google Nexus 7 has no physical buttons, except one which can be used to unlock or lock the device. It makes use of the latest Android OS, Jelly Bean, which also uses touch buttons that are available on the screen only.

However, as the device is made mainly for multimedia purposes such as gaming, video playback and music, Google has upped the ante with a quad core nVidia Tegra 3 processor. The processor was first used in Asus’ Transformer Prime tablet, and the quad core processor makes performance on the tablet as seamless as possible. Animations now run at 60 frames per second, and when it comes to gaming, the dedicated graphics processing unit is more than enough to cover all the latest games that are available. The device also integrates very well with Google Play, providing a variety of apps, magazines and show rentals for people.

The device is going to be released in the first two weeks of July, and is priced at $199 for the 8 GB version and $249 for the 16 GB version. The comparatively lower prices are sure to put the Kindle Fire out of the running, as Google’s tablet is virtually better in all respects when it comes to performance and outlook.