How to take screenshot in HTC One

How to take screenshot in HTC One

HTC One is one of the best HTC and an android OS phones in the market these days. It has a physical display of 4.7 inches, 1080 x 1920 pixels resolution, Quad core 1700 MH Krait 300 processor,  2048 MB RAM system memory, with 32 GB built-in storage, 4 Megapixel camera and 2.1 Megapixel front camera and other specs are Light sensor, Proximity sensor, and Scratch-resistant glass.

Taking a screenshot is a very common thing you want your smart phone to do. Initially there was a need to install apps to do this for you but now this can be achieved with just some buttons on your phone. There are two ways to do it which I will write below and once you take the screenshot you can find those pictures in your Gallery folder.

This way of taking screenshots is the same as taking screenshots on any android device and so does it apply to HTC one too. Hold your Power button and your volume Down key together until you hear a shutter sound you will see a brief flash light which means your picture is taken and you are done!. Release the buttons.

HTC One Screenshot – Power and Volume Down buttons

Screenshot with the use of Home key

Another way to capture a screenshot is through combination of the Power and capacitive Home buttons. Don’t hold down the Power button for too long, or else you will see the Power dialog. This button combination is also used on some other HTC devices such as the HTC One X, HTC Desire X, and HTC Desire U. 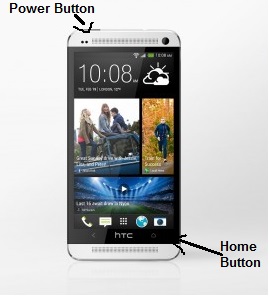 The difference between these two methods is that the first method has a different flash animation and a slightly different shutter tone. There will be a message displayed at the bottom of the screen if screenshot was successful. This method, however, doesn’t allow you to view your new screenshot on the notification menu. You will have to view your screenshot directly in the Screenshot album in the phone’s Gallery.