Samsung wasn’t much of a mobile phone player, having entered the market pretty late. Apple, on the other hand, was the world’s largest mobile phone seller since the time it released the iPhone. However, a series of continuous successes meant that Samsung overtook all the other rivals, such as Motorola and Nokia and became the direct rival of Apple in terms of the mobile market. However, Apple showed no signs of stopping, with the release of the Apple iPhone 4S. The Galaxy line of smart phones kept on increasing in stature, until the Galaxy S2 was released. At this point, Samsung broke through the roof, and the Galaxy S2 was vastly regarded by many as the most beautiful and the most powerful handset ever designed. In this comparison, we test the mettle of their subsequent releases, the iPhone 4S and the Samsung Galaxy SIII and find out which one stands on top. 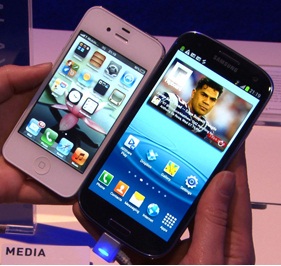 As was the case with the iPhone 3GS, the iPhone 4S sees absolutely no change in terms of aesthetics. It looks exactly like the iPhone 4, but the real changes are under the hood. The phone has a beautiful 640x 960 pixels Retina Display screen with a pixel density of 330 ppi. The camera has been revamped in the phone from its predecessor, and is now 8 MP with the capability of taking pictures up to a resolution of 3264×2448 pixels. The phone also has full HD video recording and a front VGA camera for video calling. The phone runs on the ARM Cortex A9 Dual Core chipset. The biggest change however, is the presence of Siri, a voice detection program that can answer questions, set reminders, send messages and provides complete voice integration for your phone.

The Samsung Galaxy S3 was released with very high expectations after the success of its predecessor, and it is safe to say that so far, it has been meeting them. The phone has a larger screen at 4.8” (Super AMOLED) with a resolution of 720×1280 pixels. It comes with Gorilla Glass 2 for maximum protection. The phone also has a similar camera as the iPhone 4S at 8 MP, but provides simultaneous video and image recording. The biggest change is in the chipset, which is the Exynos 4212 Quad Chipset. In terms of performance, the phone is leaps and bounds ahead of the iPhone 4S. There is voice integration in the phone too, while a dedicated GPU is present for maximum performance.