The Asus Transformer Prime was the first tablet that pushed the boundaries of dual core technology and pushed the limit by introducing a quad core processor. It was the first tablet of its kind to make use of the nVidia Tegra 3 quad core processor. Designed by Asus as a successor to its Eee Pad, the Transformer Prime is a beautiful, sleek device that provides maximum functionality. Just like its predecessor, the Asus Transformer Prime can be converted into an on the go computing device with the help of the laptop dock, or the Eee Station, which connects to the bottom of your device through a magnetic strip. The docking station includes a proper keyboard and a touch pad, and provides maximum integration with the device. But, as good as it looks, does the Transformer Prime perform as well too? Let’s find out: 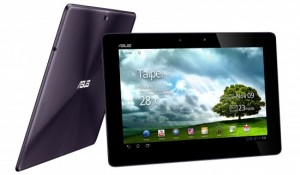 Asus developed its own customized version of Android, which is certainly much easier and much better to use. The tablet is extremely fast, and there are not many apps that are able to take advantage of its fast processing speeds. The tablet ships with Android 3.2 Honeycomb, although it can be upgraded to Ice Cream Sandwich and newer updates easily. The tablet works excellently without the docking station, and includes a pretty substantial keyboard on screen too. However, the real experience of the Asus Transformer Prime can only be gotten with the use of the docking station. The thin station has its own reserve battery, which means that if you have one, you are essentially carrying another external battery. Upon connection, the tablet’s interface changes to accommodate the new keyboard accordingly.

When it comes to the specifications, the tablet wins. Running a quad core Tegra 3 processor, it provides blazing fast speeds for the fast user. IT has a 8 MP rear autofocus camera, while a 1.2 MP camera in the front. The tablet provides flash support too, and measuring at 10.1” tall, this is a great tablet for those who want maximum usage. You can also opt to get the docking station along with it too, which converts the tablet essentially into a laptop like device. it includes a G sensor, Gyroscope, Compass and a proximity sensor. There are several specialized built in Apps from ASUS too, which streamline the overall experience on the device.