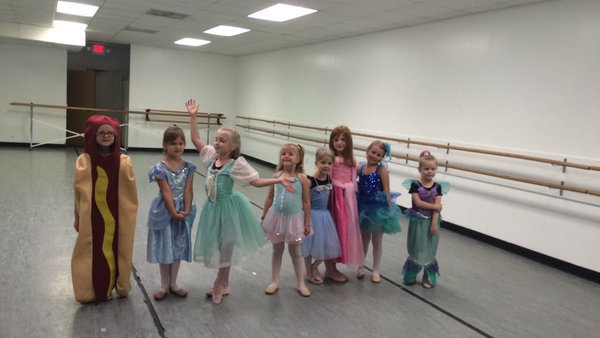 Ainsley, a 5-year-old girl she turned up to her dance class’s Princess Day, dressed up totally unexpected, as a hot dog!

It was princess day at dance and one little girl came as a hot dog I have never admired someone more pic.twitter.com/RrvBL3HTLP

Pictures of Ainsley started being shared on Twitter and Tumblr soon. At one point #hotdogprincess was trending as the photos went viral.

I LOVE THIS SO MUCH 😂 pic.twitter.com/rKwYYlx0eA

Ainsley is our modern day hero.

This is an even better picture. You’re a hero, hot dog princess. https://t.co/mnNVMn7ZZ7

Since when are being a hot dog and being a princess two mutually exclusive things? This girl makes total sense to me https://t.co/h1Dp1m9zcB

Sarah Nativi and her friend Grayson Lamontagne, who teach at Holly Springs School of Dance in North Carolina posted the original pictures in mid-May.

It was princess day at dance and one little girl came as a hot dog I have never admired someone more pic.twitter.com/iro5mL2Bvc

No parent is ready to learn that their daughter is trending… #hotdogprincess Best part is it was all her idea! pic.twitter.com/YBmUkRoj4y

Nativi said Ainsley wore the costume because it was her favorite.

Ainsley ended up being invited to open the school’s spring recital on Saturday and got out her favorite costume once again.

“She loves princesses, but she wanted to be original and wear a hotdog costume instead,” said Natvi. “She wore a princess costume underneath it and said she was a princess on the inside!”

She inspires us all! Never change yourself Ainsley!