What is This Bizarre Mysterious Mummified Creature?

What is This Bizarre Mysterious Mummified Creature?

A bizarre mummified creature was found in an old cellar by Abudllah Ozturk, a locksmith from Niğde, Anatolia in Turkey. Though it was found 2 years ago, stuck in a slightly curled position, it hasn’t been  identified by the experts yet. Archeologist believe the animal may be prehistoric, while others believe it could be some kind of cat, based on its mighty incisors.

Dr Lidija McKnight, an Egyptologist and expert in animal mummies at the University of Manchester told MailOnline: ‘It looks like one of the naturally mummified cats we find in Britain -bricked up in chimneys – for example.’

‘The tarsel/carpel bones look long which is diagnostic of feline species.’ 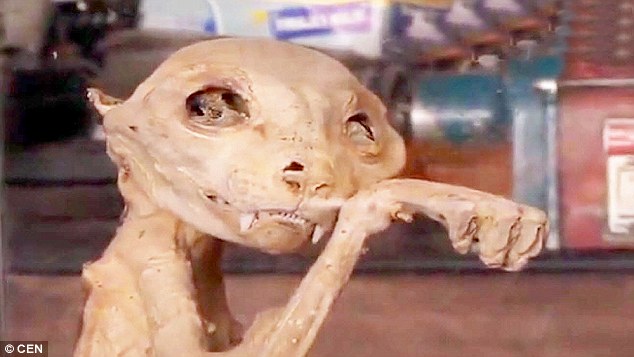 Abudllah Ozturk, has since put the remains on display in the window of his shop, after experts failed to identify the animal.

He told local media: ‘I called two archaeologist friends who came and examined the skeleton.

‘They told me that it belongs to a very old species which is probably extinct but they couldn’t identify it and they didn’t know which species it belonged to.’

What do you think this strange looking mummy is?