The worlds most extensive underwater cave is a recent discovery by a team of scientists and Scuba divers. The underwater tunnel is full of ancient artifacts and represents the ancient Maya culture.

This cave is located on the eastern coast of Mexico in the Yucatan  Peninsula and is around 350km long. This discovery is one of the most significant archaeological findings of the century.

Guillermo De Anda, the Archeologist of Gran Acuifero Maya, says to Al Jazeera,“there are under 200 caves in this Acuifero system which we thought could be connected, but we were not sure for now we know the collection and flow of water.”

Scientists also think that the cave was a source of fresh water for the ancient Maya civilization. 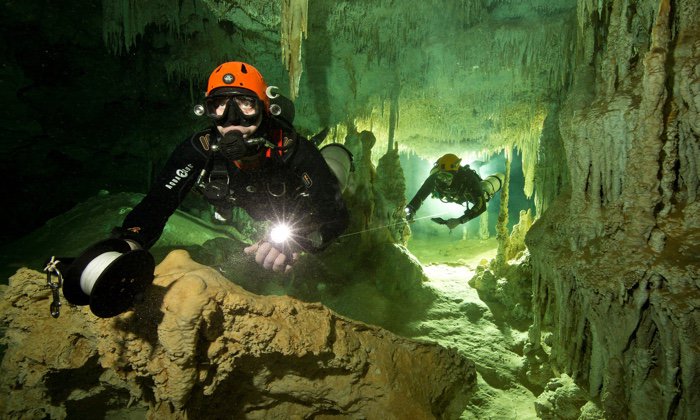 De Anda is a dedicated researcher of Mayan civilization and is currently working as a specialist with the national geographic channel also works for National Institute of Anthropology and history. His research and hard work for decades have discovered the beautiful underwater caves in Quintana Roo.

The newly discovered elephantine Sac Actun System. Initially, it was thought to be two different caves, but it turned out to be a single gigantic cave. Sac Actun discovered by the German diver Robbie Schmitter and his partner Toddy Waelda with the help of Guillermo De Anda. Robbie started with Tulum and with his expert team found a passage that connects Sac Actun to Das Ojas.

The Mayans called the entrance of these caves as  “Shee- Bal- Ba.” Mayans named the underworld “The world Xibalba” which translates to ” Place of fear.” The explorers have pledged to protect largest underwater world on our planet. The Divers think there might be people living in these caves during the ice age. The civilization used pots and burners.

Experts found skulls of bears and bones seems to be approximately 15000 years old.  Researchers claim Sac Actun can be connected to three other underwater caves.

Imagine there is a planet within our planet to be explored and these exceptionally bold divers are doing everything to find more.  Human remains and pottery is waiting to be tested by the archaeological department. Scientific application of the remains from the fauna can be as massive as the cave.