After Landing in a Vat of Tikka Masala, This Gull has turned Orange

After Landing in a Vat of Tikka Masala, This Gull has turned Orange 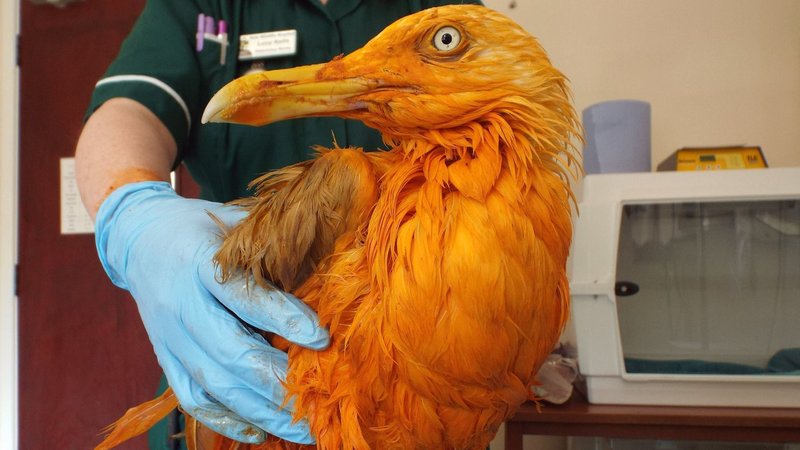 A sea gull got a day-glo makeover when it fell into a vat of chicken tikka masala in Wales. The bird was taken to a wildlife hospital that says it will be fine | Vale Wildlife Center

So there is this gull that is not hard to spot thanks to the bright orange color and obviously the smell. This gull had an adventurous day of dousing itself in vat of tikka masala, coloring itself and obviously smelling delicious.
The bird was found “at an undisclosed curry factory in Wales” said Lucy Kales, a veterinary nurse at the Vale Wildlife Hospital near Tewkesbury, who documented the bird’s recovery on Facebook.
Speaking about how he fell into the vat, she said he might be picking out pieces of chicken and fell into a vat- which was kept outside.

“He would normally have been able to take off from water but the curry was too thick and gloopy,” she said to Wales Online.

Fortunately, the bird was not in the vat for long. Though the cleanup was easy, still the bird will have to remain under observation long enough to allow his feathers to regain the natural oil lost in cleaning process.

“The gull will be released once his feathers are waterproof” stated Vale founder Caroline Gould. She also added the bird is now back to his normal color and will be absolutely fine when released.

As a matter of amusing fact that chicken tikka masala is one of the most popular dishes in Britain.

Watch the video clip below till the end to see how this poor bird recovered.