At the World Wide Developer’s Conference this June, Apple introduced the world to the latest mobile platform that the company is going to adopt, the iOS 7. Even though the final release isn’t expected until after this fall, the release of iOS 7 is going to be a massive game changer for Apple. Many people have been showcasing growing resentment towards the Apple mobile platform, which has been overshadowed by the growing popularity of the Android interface.

Since its inception back in 2007, the iOS has been virtually undisturbed in terms of visual changes. The same icons, the same viewing standards and the same functionality has been maintained by the company since over six years, and this has now taken a toll on even the most diehard of Apple fans. With the prices of phones rising (the iPhone 5 retails for $700), a change was much needed since the company has lost a significant chunk of market share, while stock prices have also fallen considerably. Therefore, it can be said that the introduction of iOS 7 is a welcome break for the massive tech giants. 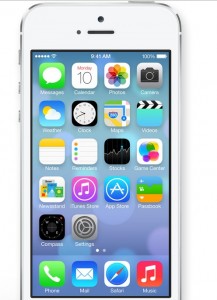 From the lock screen to the style of the icons to the animations, the company has redesigned everything with the latest iOS, Tim Cook stated that this was the most revolutionary change that has been made to the IOS, and it certainly shows. First off, the standard slide to unlock system has been altered. It does not sit near a sliding button, but rather is positioned on the screen, as if expecting you to know what you need to do.

Moreover, the company has also introduced a fade to black outlook. For instance, when you lock or unlock the phone, rather than going black directly, the screen now fades out, and when unlocked, fades in. A welcome change, it has to be said. The most revolutionary change however was the introduction of parallax view, a 3D type effect. When you tilt the screen upwards or downwards, the background moves accordingly, while the icons stay still. Using the gyroscope to full effect, the parallax view is likely to be a ground breaking feature, however it hasn’t yet been confirmed by the company as to how pronounced the feature is likely to be.

A slew of different animations have also been introduced, while the company has made a number of changes to the icons. All in all, a complete redesign has taken place.