This is a speculative comparison regarding the new features that the Apple iPhone 5 might have, as well as how it would hold against the Samsung Galaxy S3, which is the leading smart phone in the market right now. The Galaxy S2 was the first phone to overtake the iPhone in terms of sales and managed to stay at the top, making it Samsung’s greatest success. Hence, it was obvious that they were going to put everything in to the development and improvement of their flagship device and make it even better. However, the iPhone 4S was Apple’s most advanced smart phone, and even though it was hugely successful, it still fell short of its own expectations. Therefore, it is safe to say that the new iPhone will be a major overhaul of the iPhone 4 series, and will bring something new to the table. Here’s our speculative comparison of the two devices: 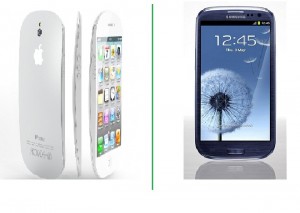 Many have been speculating about the specifications and features that would be located in the iPhone 5. There are a number of different things that people have come up with, but nobody knows for certain because Apple has been really tight on leaks, and at present, there isn’t even a picture of the original iPhone 5 to go along with. However, there is a very solid chance that Apple will increase the size of the screen to a much larger one than the current 3.5”. With the release of the latest Retina Pro Macbook, the chances are high that the same screen would be installed in the iPhone 5. It remains to be seen however whether Apple will stick with the same dual core processor or update it to a quad core processor. Most probably, it will be the latter. The camera might also be rebooted, as Apple usually likes to set new trends, and we might just see a jump to 12 MP.

The Samsung Galaxy S3 was released in May 2012, and features a Quad Core processor with a dedicated 400 Mhz GPU. It has a 8 MP camera, and a gorgeous 4.8 inch display with the Super AMOLED screen. The phone features an intelligent front camera with face tracking and eyeball tracking technology, which helps it conserve battery if you fall asleep. The beautiful curvy design makes it one of the sleekest device in the market right now, and it is packed with performance to match.