When Temple Run came out, it was a huge success and the whole gaming world was suddenly taken with the endless running experience. Needless to say, it inspired a whole new genre of mobile gaming, as people began to get hooked on the game itself. Players would check their scores and compare with each other in order to see who got the highest, and it was only a matter of time before a whole host of different spin offs were going to be created. Despicable Me: Minion Rush is designed to provide a great deal of fun to people who were fans of the first movie. 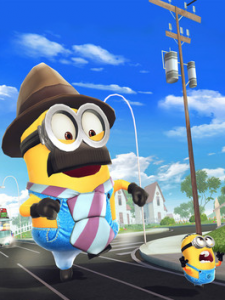 Basically, the game starts with you playing as one of the minions. Your aim is to become the minion of the month, and eventually, minion of the year. In order to achieve that target, you have to run as far as possible. Obviously, the game is more than just running. There are bananas and tokens that you need to get along the way, which will help you in increasing your overall points tally. Moreover, there are a range of different boosts and features that are thrown on your path. Running over them will allow you to get further in a faster manner, while various others provide extra perks such as invisibility, etc.

In order to increase your overall score, you must also knock off as many minions as you can, while collecting bananas along the way too. Minions might prove to be a bit tricky to knock down, and you might eventually end up falling, but the most efficient way of playing this game is to just focus on your running, and any perks that come along the way should be treated as a bonus. This way, the more you run, the greater your overall score will be.

There are missions in the game as well, which require you to connect your Facebook account to the app, and then inviting people. Then, you are going to encounter the boss, Vector. In order to beat him, all you have to do is avoid the robots that are thrown at you, and tap at the smaller robots that come across with a target on their backs. Tapping them will allow you to throw them back towards Vector, and three hits are more than enough to finish the job. All in all, Minion Rush is a well designed mobile game.