Being such a popular game, many people might be expecting that there would be a number of different cheats for the Fruit Ninja app. However, that is not the case. There are no ‘direct’ cheats that people can use, making this game a bit different from others. However, there are ways by which you can make your game much more fun and interactive, and in the following article, we have compiled a list of some of the best achievements that you can get in the game, as well as how you can get them. For those who have never played it, Fruit Ninja is a great game to try, and for those who are toting on the verge of boredom after playing it again and again, these new achievements and options will give you something extra to look forward to when you begin playing again:

One of the things that you can do in order to get a higher score is to never lift your finger up from the screen. This way, after a few hits, you will begin to string together a number of different combos as well as critical hits, taking your score up higher. Just move your finger around the screen, but do not lift it up from the screen. 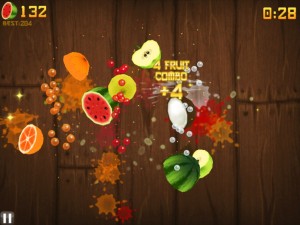 Have you seen the Big Rare Fruit that comes up during the ‘Classic Mode’? If you keep your finger pressed on the Big Rare Fruit for a few seconds, it will break and you will be rewarded with 40 points. There is also a three finger slice which will provide you with an extra bonus and more points. However, make sure there aren’t any bombs on the screen when you try this out, because if you accidentally touch a bomb with your finger, your game is over and you will have to start all over again.

There are a number of different achievements available as well, such as if you cut the mystery banana 10 times in one play through, you will be awarded with the ‘Patience is a Virtue’ achievement. Or, if you tie your best score, you will get the ‘Are You Kidding Me?’ achievement. Your skills are showcased by the achievements that you have, and you can then easily share these achievements with as many people as you like using your social network connections. There is an option of sharing achievements through the app.