Simplicity can be highly addictive, and in this case, what we are referring to is probably one of the simplest, yet one of the most addictive games for the iPhone, iPad and all Android phones. Fruit Ninja is a game that just tests your finger swapping reflexes as well as your skills of observation, with a very simple objective. The game starts with an open screen, and you can see fruits being hurled at you from somewhere. As a ninja, your job is to slash through the fruits in mid air.

In order to do this, all you have to do is slide your finger across the screen. The direction you slide your finger in is the direction that the food would be cut in. However, there is a catch. The important thing is to just slide the fruits, because in the midst of so many fruits being hurled at you, there will also be a few bombs. Slash a bomb, and your game ends prematurely. Or, if you fail to slash three fruits and they hit you in quick succession, your game will end too. There are retries for a certain level, making it a much more playable experience. 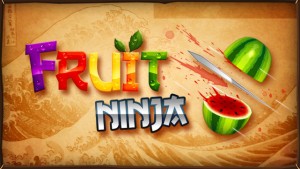 Fruit Ninja is available in two versions. The game is designed by an Australian developer by the name of Halfbrick Studios. There are two versions available on the App Store and Google Play, one of which can be downloaded for free while the other can be purchased for $0.99. The game’s simplistic interface is the winning factor here, because all you have to do is maintain your focus and keep slashing. This is a great game on the whole, and can provide people with endless hours of fun and enjoyment.

The free version allows you to try the game up to a limited number of levels, making it easier for you to make your decision before you purchase the game itself. When the game begins, you can choose to either continue from the level you last left on, or start a completely new game. As the levels increase, the complexity of the bomb throws as well as the number of fruits that you must slash across the screen will increase, making the game a bit more difficult. Overall, this is a highly addictive game, as can be seen from the millions of downloads that have been completed all over the world.