The reason why Google Nexus 7 has been pitted against Kindle Fire is because both of the devices have the same prices. Similar to the Barnes and Noble Nook tablet, the Kindle Fire was priced at a very convenient $199, making it one of the fastest selling tablets in the market. Comparing the prices with other tablets, this is a relatively cheap buy, and with the features and performance that it provided, the Kindle Fire heralded much success in the market. However, Google recently announced the Google Nexus 7, a tablet that is also priced at $199, and is going to have a lot of distinct functions, that will most probably put the Kindle Fire out of business. Hence, if you are looking to buy a tablet in the less than $200 budget, which one would you go for? Here’s our assessment: 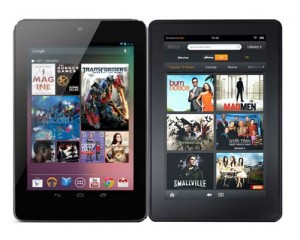 The Kindle Fire was Amazon’s first foray into the tablet market, and it was a huge success. At the time when tablets were available for a price around $500, the Kindle Fire came as a breath of fresh air. It was priced at $200, had a powerful dual core processor, a good IPS TFT display and 8 GB of storage. For such a small price, you couldn’t really ask for more. However, the one major drawback of the device was Amazon’s heavily customized version of Android. It was buggy, caused problems and often resulted in many people having to reboot their device. For that purpose, it became a major issue for many people. The tablet was primarily targeted towards media consumption, integrating Amazon’s cloud storage service, as well as movie and show rentals in order to make it highly easy for people to watch shows and movies without a hitch. It also came with 25 GB of cloud storage for free.

The Google Nexus 7 is Google’s latest tablet and has a quad core nVidia Tegra 3 processor, 8 or 16 GB of storage (as well as 25 GB of cloud storage) and is also centered on media consumption. However, because it makes use of Google’s latest Jelly Bean operating system, it is bound to be much easier to use, and early reviews have shown that the device breezes through browsing and gaming, as well as high definition video playback. Upon release, it is bound to make a major splash in the tablet market.