11 Most Colorful Cities Around The World

11 Most Colorful Cities Around The World

If you all remember the saying “Rome was not built in a day” which means its not easy to make the cities beautiful overnight. There is more to these cities than brick walls and streets. Its the colors and architecture that makes is beautiful. Check out these most colorful cities of the world: 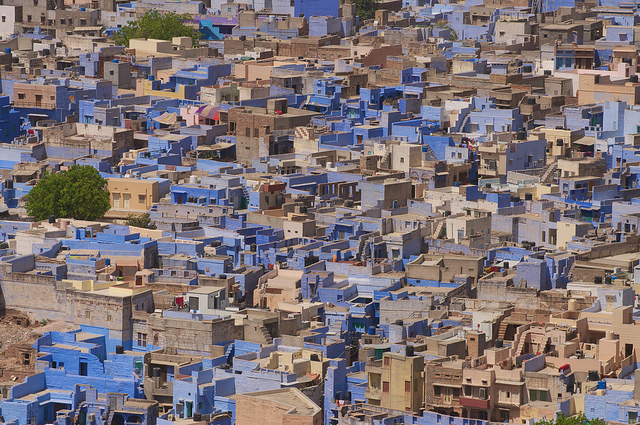 Photo By Jon Connell on Flickr Looking down on Jodhpur  License (CC BY 2.0)

Rajasthan, the dessert state shares a part of border with Pakistan is located on the western part of India is the land of kings and palaces and forts. Its well known for its cultural heritage and is one of the most visited state by international tourists coming to India. Jodhpur the second largest city in Rajasthan is located in the center and is know as the “Blue City” mainly because of the bright blue-painted house in the most part of the city. Some say that this tradition emerged as the part of caste system back in those days. So according to that, Brahmins – the members of priest caste who are considered at the top of the caste system, had to paint their houses blue to distinguish themselves from others. Over the years, other non-Brahmin families around the area of Mehrangarh Fort also painted their house with a bright blue color, giving the entire city a feel as the sky has fallen down himself to paint the city blue. 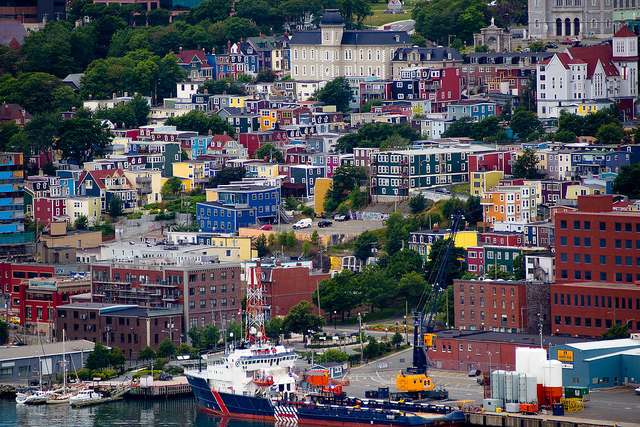 St John’s is the capital of Newfoundland and Labrador province in Canada. Its downtown is know for beautifully colored houses. It is a very scenic place and is perfect balance of nature and night life. Even though it gives a feel of small-town it is the largest city in Newfoundland. The streets are filled with small shops, boutiques, cafes and restaurants. It is located on the Atlantic coast of Canada, at the beginning of the Trans-Canada Highway Route 1, and is just 3 hours from Toronto and 4 from New York.

Cinque Terre is a six mile stretch of centuries old villages rowed together on the Rivera coastline in Italy. In this stretch are 5 small villages which are amazingly scenic and beautifully colorful. The 5 towns that form this place known as “The Five Lands” are : Monterosso al Mare, Vernazza, Corniglia, Manarola, and Riomaggiore.

Guanajuato is the capital of the state with the same name, The State of Guanajuato. The town was founded by the Spanish in 16th century and by 18th century it became the world’s leading silver extraction center. This city in the mountains of central Mexico, has the houses unimaginably beautiful colored that slope down the hill. The colors of the house range from fuchsia, pink, saffron yellow, indigo, baby blue, aqua and lime green just to name a few.  It is internationally knows for its art festival, the Festival Cervantino. 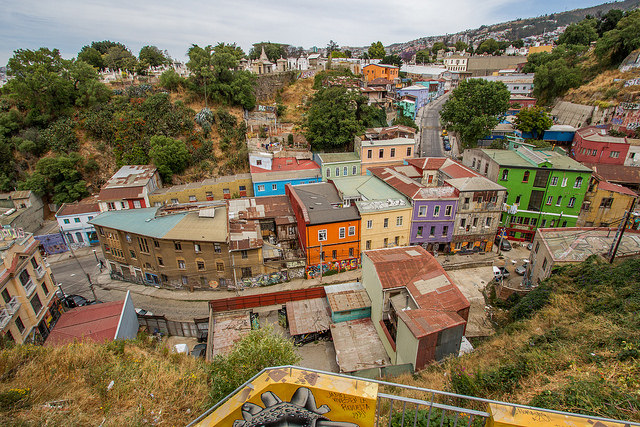 Located on central Chile’s Pacific coast, Valparaiso is a major city, seaport, and educational center in the county! Its know for its bohemian and artistic vibe and colorful clifftop houses. The city is vulnerable to earthquakes, because of its close proximity to Peru-Chile Trench. 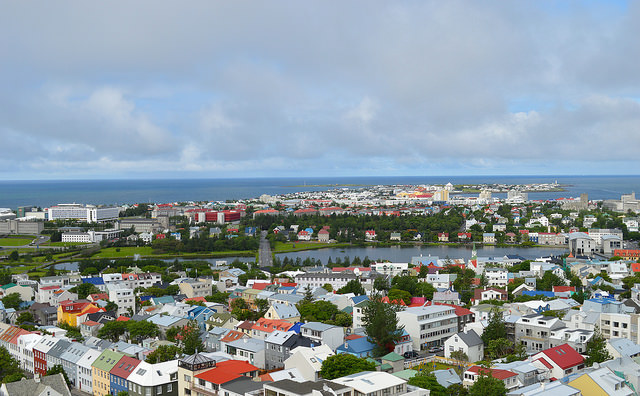 Reykjavik, Iceland’s coastal capital, may have gray skies most of the year but the house are so beautiful that they fill your eyes with colors. Buildings across the city’s skyline are painted in teal, brick red, mustard and white. This city is renowned for its night life – late-night clubs and bars in its compact center. 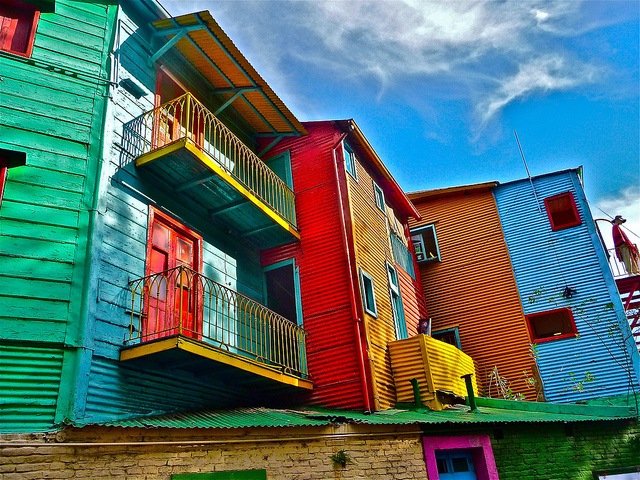 La Boca is a working class neighborhood in the city of Buenos Aires, the capital of Argentina. There are walking tours of the neighborhood so explore the vibrant colors of the streets. Tourists are advised not to go out side the main street area as it has a reputation of being prone to more crime than central areas. 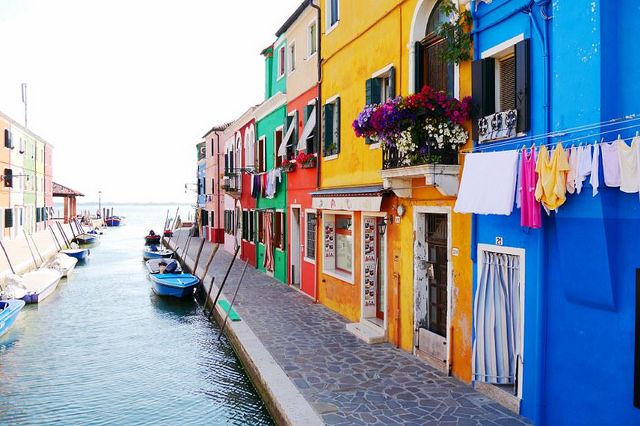 Burano a small island of Venice in northern Italy, is famous for its colorfully laced houses. Even though it is located on the same lagoon as Venice, Burano give a more tropical vibe because of the vibrant color choice of the houses. If you own a house there and want to paint your house, you can’t do that until you get an approval from the government for your choice of the color. Government will respond by making notice of the certain colors that are permitted for that particular lot. 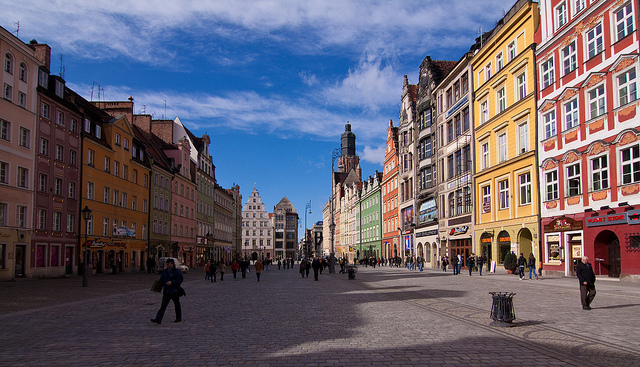 Image By Brandon Atkinson on Flickr City Of Color License (CC BY 2.0)

Wroclaw is the fourth-largest city Poland and is the major political, industrial, commercial and educational center for the region. In the heart of the city is the place called Market Square, one of the most beautiful and largest urban squares in Poland. Travelling can be a challenge in this town as very few people speak English even though it has a population of 630,000! 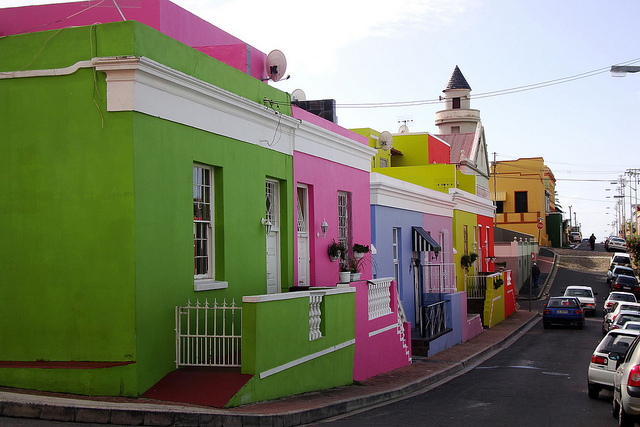