Font Quiz is a quiz game that requires the user to guess the name of the brand, movie, game, television or bands from the font that is used to describe the name or the logo of those famous icons. Simple tap on any font you recognize and type in the correct answer. You can also use the hints provided.

Here are the answers for Fonts Quiz Games 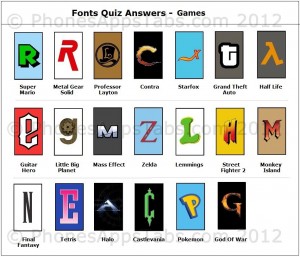 PROFESSOR LAYTON – Letter L in brown over a hat in black

HALF LIFE – the mathematical symbol lambda in orange

LEMMINGS – Letter L in green with a yellow border

POKEMAN – Letter P in yellow with a purple border

GOD OF WAR – Letter G made of fire graphics 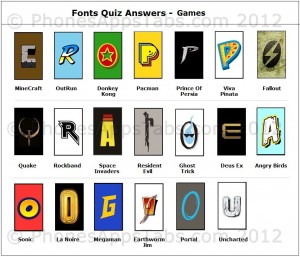 VIVA PINATA – Letter P in red, yellow and orange with a light and a dark blue border

FALLOUT – A lightening streak with a blackish oval behind it

ROCKBAND – Letter R in black with a white border around it

LA NOIRE – Letter O with a light beam forming it

UNCHARTED – Letter U in white with black scratches on it