iOS in the Car Provides AirPlay Support over WiFi

iOS in the Car Provides AirPlay Support over WiFi

When the latest version of Apple’s famed operating system, the iOS 7 was introduced to the world back in June at the WWDC, there were a whole host of different features that the company introduced. For starters, it introduced a panoramic 3d wallpaper that was very unique, and with that came a slew of different improvements and modifications to build upon the second most popular mobile operating system in the whole world. The good thing about iOS 7 is that it introduces a number of features for drivers as well, and with BMW and Audi already announcing that they are going to release all of their 2014 models with built in Apple support, the iOS 7 has really taken in car functionality to the next level. 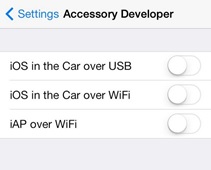 For instance, the company states that integration within the car has been taken to an altogether new level, allowing drivers to access their maps, messages as well as numerous other services such as Pandora and Siri without even taking their eyes off the screen. However, details about how people will be able to access these features without having to take their eyes off the screen were pretty scarce, and a lot of developers were left wondering regarding how these features will work.

Hamza Sood, a developer who has been credited with uncovering a number of hidden settings present within the beta of iOS 7, has now discovered another set of hidden settings within the iOS 7 Car features, which shows that not only will you be able to access your mobile’s display through the USB Cable and have it mirrored on the car’s display, but you will also be able to do so via Wi-Fi, hence providing you with a seamless connectivity option.

Almost all of the latest models of Honda, Nissan, Toyota, BMW and Audi are expected to introduce iPhone integration within their vehicles, so it is widely expected that iPhone integration will be improved over the next few months, and with the release of the latest iOS 7, it is expected that the company will take car integration to a whole new level. iOS 7 is likely to be introduced within November or maybe December, with the announcement of the iPhone 5S. Hence, users of the iPhone can wait in excitement and anticipation of a slew of different features that will be announced soon!