All a dog wants is love from his owner. Their love knows no bonds and they are the best buddy a man can have. Today we have a sad story to share with you about a lost dog, a Staffordshire Bull Terrier mix was found on a bus in London, by Amos Paul Mak, the bus driver. He wasn’t sure how the dog got there but he knew that the dog was determined to stay, waiting for his owner to come take him back home.

Amos, posted on FaceBook that he wanted to take the dog home but was not allowed to do so due to company regulations, told the Evening Standard:

” Tried to move it onto another bus, as the one it’s on is needed in service, [but] he won’t budge.

“ [The dog is] Affectionate enough but scared.

Since the dog wasn’t ready to leave the bus, they wondered if that was the last spot where he saw his owner (who he undoubtedly loves the most and wants to wait for him until he gets back). 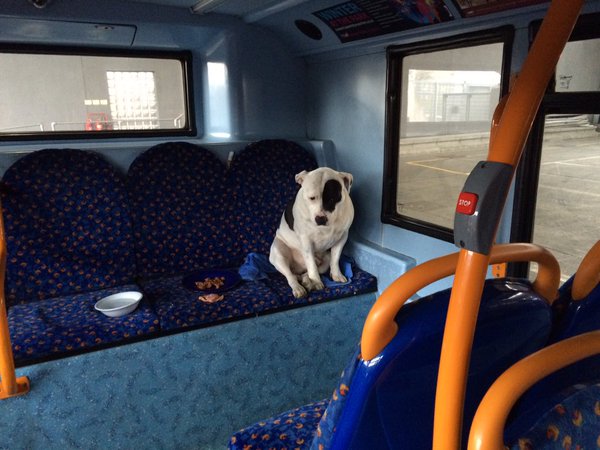 Amos wasn’t the only one touched by this sweet pup, but a fellow worker Rik Hatton, helped care for the dog during the night. He said:

” When I arrived around 6.30am he’d been there all night. Very scared, but not aggressive. I gave him food, water and my body-warmer. I nicknamed him Bus-ter.

“This dog is currently being looked after by our animal welfare team while we try to locate its owner.

We hope and pray that Buster finds his way home soon.